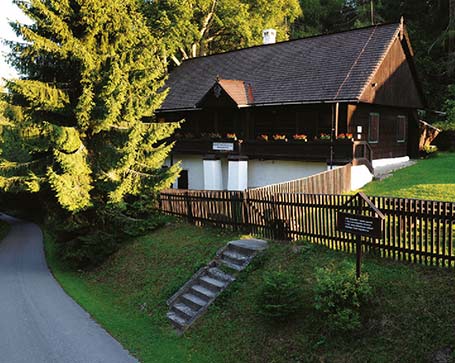 If you want to experience a unique atmosphere of rooms and places, which inspired Slovak authors, visit places where they were writing.

Discover these places and return to the time of the birth of the most important literary works. Uncover what writers saw around them, in what circumstances they were writing and what motivated them to write.

On the beauty of oravian nature didn´t allow either Pavol Orszagh Hviezdoslav anybody to say a bad word, it was his home country, the closest place to his heart. His original name is Pavol Országh de Felsőkubin, was born in oravian village Vysny Kubin, he wrote under more pseudonyms, but under that “Hviezdoslav” he created his most popular literary gem.

He didn´t choose this place randomly, but he fulfilled this way his dream from childhood when he was fascinated by infinity space of the night sky, full of stars and galaxies. In connection with the sky full of stars isn´t connected only his name but also the name of a little planet discovered in the year 1983. The planet was around 12km big got name 3980 Hviezdoslav.

Take a trip, which will interest kids and also adults, trip to oravian nature, where regularly went also Pavol Orszagh Hviezdoslav. Walk in his steps, which will lead you under the edge of Babia hora to the village Oravska Polhora.

The authentical atmosphere of hajovna will take you to historical times

Hajovna under the Hill stays exactly how it was in times of Hviezdoslav. You will find here exactly the same environment, as it was seen by Hviezdoslav and described it in his work. Eventually, from the window, you will see 100 years old lime tree, where sat Hviezdsolav family, when they were hosted by a young forester. Yes, real persons – forester Jan Lacha and his wife Maria became his inspiring characters for his lyrical-epical composition of work Hajnikova zena.

Right, when you step into exposition you will appear in an environment, in which author inspire himself and his unique work was born here. Next, you will move to the second room, which is dedicated to his creation. Here is also a corner with work table with handwritings of Hviezdoslav.

Hajovna, which is connected not only with one writer

A childhood spent here one more, very important, person of Slovakian literature – Milo Urban. Evidence of that is a very unique picture, which you can find in exposition – capturing Urban as a kid standing in front of Hajovna.

Along with the entry, you will be attracted by a glowing cabinet – Picture memories of the author’s life. Interesting is also a true copy of the office from his stay in Croatian Grob, you can´t miss personal items belonging to Milos Urban. Despite all the life stages, Orava remained faithful and kept coming back to her, not only in his works.